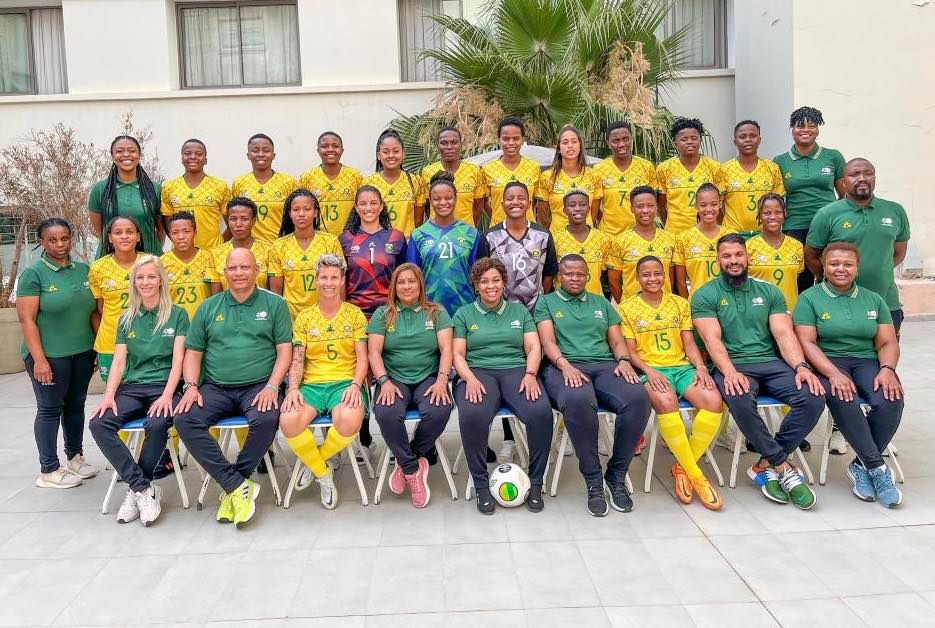 I am not convinced that as a society we pay enough gratitude toward the good things that happen in our times. The herstoric moment of bringing the trophy of Women’s Africa Cup of National is both heart-warming and inspirational. The academic and artistic engagements are reaffirming and needs more visibility.

I  feel that both the arts and sports have a unifying energy that needs our nurturing. Turning attention to Banyana Banyana, I think your resounding welcome on 23 July in the country was very well deserved. I also wanted to let you know about some of the good and not-so-good things that happened while you were away. Every time they happened “Asiphelelanga” kept belting in my head. Once again welcome back!

You rightly pointed out that while you were away, we could not watch some of your games due to load shedding, you knew that we carried you in our hearts. You were right.

Nevertheless, most of us watched as Banyana Banyana won over Morocco (2-1). On the day the championship started (2 -23 July), the National Arts Festival (NAF) was about to end and as ASSITEJ SA we celebrated our 15th year of existence (2007 to date). Amongst other things, children played indigenous games and shared stories about their trials and tribulations. One of the stories that touched me was of a girl who was bullied because she had Tuberculosis (TB). She ended up being a songbird because music served as a powerful healing avenue. As we continue to celebrate the Banyana Banyana victory, the stories of how each of you overcame challenges such as Covid -19, were poignant to note.

There is something else that you need to know. On that same day, I went to see a one-womxn show co-written by Mpume Mthombeni and performed by her; Isidlamlilo (The Fire Eater). I am not exaggerating when I say I still have goosebumps when I think about that show and Mpume’s performance. The last time I saw her on stage was when she played Napoleon in an all womxn Animal Farm production; produced by Nobulali Productions (fondly known as Shakexperience) and watched by thousands of young people nationwide.

Isidlamlilo (The Fire Eater) was based on a true story of a former Inkatha Freedom Party (IFP) assassin. It was refreshing (and devastating) to learn the history of South Africa from a womxn’s lived experience. I am sure that the consummate mastery of this piece will inspire many young women to feel that they too can walk the stage solo.

Just before you left, Mme Rea Ledwaba lost the race for the South African Football Association (SAFA) Presidency. Even though she was unable to gather enough votes, it was good to witness a womxn sticking her neck out to lead.

I am both sad and happy to let you know that a few days after you arrived, the news of Tshegofatso Pule took centre stage. Remember she was brutally killed by Muzikayise Malephane who confessed that her boyfriend Ntuthuko Ntokozo Shoba was the mastermind behind her killing. The judgement has now been handed down and he has been given life imprisonment. At the same National Arts Festival, a piece made by womxn, called Whistleblowers (performed by Kgaogelo Makgoba, Boitshepo Maile, Reabetswe Gaentswe, Modipadi Mokgohloa, and Phindiwe Qakoshe) told the story of the atrocities that happen to womxn through the eyes of a female hockey squad. They found a way to hold Tshegofatso, and so many many others, up to the light, through their creativity and imagination.

I am very happy about the recognition that Professor Puleng lenka Bula made toward Banyana Banyana. I must just add something, and it relates to ways of meaning and knowledge making. There is some discontent with the content being offered in our education system. As people take on the scholarship to further their studies, please be reminded that individual and collective people have invaluable experience and knowledge that needs to be acknowledged and that they should not be intimidated by English or Afrikaans as a medium used to facilitate learning. Research is pointing to the fact that our students who are not proficient in these languages have felt alienated and demoralised. At the University Currently Known as Rhodes (UCKA), the Head of Politics Department, Dr Sphokazi Magadla’s efforts to acknowledge and promote multilingualism is gaining support, and it is worth tracking for its legacy. She reminds us that knowledge making and creation is a co-dependent venture that needs awareness to discard and make absolutes, ways of knowing and being that no longer serve us. I was very excited to learn about this.

This is Womxn’s Month, which memorialises the 20000+ women who marched to the Union Buildings on 9 August 1956 to protest against Pass Laws being extended to them. I find an interesting linkage between your success, Banyana Banyana, and this year’s theme (Women’s Socio-Economic Rights and Empowerment: Providing Healing, Promoting Hope). It feels to me that your win and the efforts of other women mentioned, are doing just that, and this herstoric moment will forever be cherished.

While following the events of your celebrations since landing in South Africa, Nomvula Kgoale’s story of “red ‘lipstick’ being her thing” made me chuckle. It reminded me that in our diverse efforts to make South Africa great, there is always that one ‘thing’ that adds more prowess and confidence to a woman’s ability to do the unimaginable. That ‘thing’ for me is ‘earrings’. Do any of you team members and other awesome womxn mind sharing what your ‘thing’ is? Who knows, your response might just trigger a whole new movement to inspire another generation.

On behalf of ASSITEJ SA, we would like to congratulate you and the entire team, which now includes other womxn included on the list above. Let us tell and hear more stories of success about womxn. August serves as an important nudge. We honour you, we see you, and we look forward to more stories being created about you, the entire team and many womxn in South Africa and beyond.

Lalu Mokuku is the chairperson of ASSITEJ SA and Executive Committee Member of ASSITEJ International. She loves using Afro-Feminisms as a lens to make sense of the world.