ASSITEJ was established in 1965, as a global alliance linking thousands of theatres, organisations and individuals working in the field of theatre for children and young people. 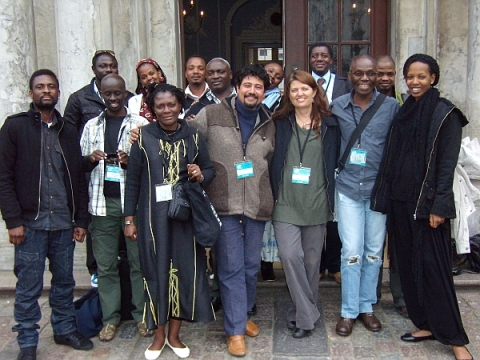 ACYTA (African Children and Youth Theatre Arena) is an African regional network linking all the Assitej centres situated in Africa.

The key figures in ZATCYP who ensured the success of the event included the late Tisa Chifunyise, the Administrator for ZATCYP secretariat and also one of the vice presidents of ASSITEJ International, having been voted for at the 1999 ASSITEJ World Congress in Tromso, Norway. Others were: Dr Maclaren, Elizabeth Kabasa, Abdul Makaza and the late Norman Takawira.

ASSITEJ Zimbabwe continued with their efforts by inviting some artists from the region once again to their international theatre festival held in Hwange, northern Zimbabwe, in July 2000. ASSITEJ International President, Harold Oaks, also attended the event with Niclas Malmcrona, the Secretary General, who visited Zambia directly after the festival. After the Zambia visit, Malmcrona flew to Harare to discuss the possibilities of SIDA funding the regional network programmes. The efforts bore fruit, and SIDA agreed to fund the regional programmes. Later that same year, in December, ZATCYP hosted the ASSITEJ International Executive Committee in Harare. Again, they invited countries from the southern African region. However, they also invited artists from east Africa to join them: Tanzania, Uganda and Kenya. The membership eventually spread to West Africa with Cameroon and Nigeria becoming part of the network.

It was during the Ezulwini meeting in March 2007 that the name ACYTA (African Children and Youth Theatre Arena) was adopted by the network.

Later in November of the same year, a meeting (and workshop) was held in  Johannesburg. At this time, elections were held to choose members of the Coordinating Committee of ACYTA. The following were elected: Cheela Chilala, Zambia (Chairperson), Hope Azeda, Rwanda (Vice Chairperson), Sandile Ndzimande, Swaziland (Treasurer), Yvette Hardie, South Africa (Communications Officer).

The first major participation by the region in the World Congress was in Seoul, South Korea, in July 2002. The regional meeting held in Durban, South Africa, in early 2002 decided that not all centres could be represented in Seoul due to the limited amount of funds available. Therefore only the following countries were represented: Zambia (Cheela Chilala), Namibia (Frederick Philander), Cameroon (Etoundi Zeyang), Kenya (Ricky Gitahi), Uganda (Jackson Ndawula), Tanzania (Phillimon Mwasanga), and Zimbabwe (Elizabeth Kabasa). After the congress, Cheela Chilala and Jackson Ndawula were co-opted into the newly elected executive committee.

The region was also represented at the 15th World Congress in Montreal, Canada, in September 2005, by the following: Cheela Chilala (Zambia), Hope Azeda (Rwanda), Jackson Ndawula (Uganda), Etoundi Zeyang (Cameroon), Onkemetse Clark (Botswana), and David Ndjavera (Namibia). At the congress, Cheela Chilala was elected as one of the three vice presidents of ASSITEJ INTERNATIONAL, while Hope Azeda was elected as a member of the executive committee (2005-2008).

In the 2008-2011 term, African candidates serving on the Executive committee were Yvette Hardie (South Africa), who served as Treasurer, and Hope Azeda (Rwanda). During this period, the SIDA funding came to an end, and the African Children and Youth Theatre Arena (ACYTA) continued to operate entirely independently. A meeting of ACYTA was held in Johannesburg in November 2009. A regular newsletter was introduced to report on members’ activities.

At the May 2011 World Congress and Performing Arts Festival, two Africans were again elected to the Executive Committee. They were Etoundi Zeyang (Cameroon) and Yvette Hardie (South Africa). Yvette was elected by the General Assembly as President of ASSITEJ, the first African president in the history of the organisation.

ACYTA is now headed by Etoundi Zeyang (Chair) and Yvette Hardie (Deputy Chair).There have been ACYTA meetings in 2011 at the World Congress (Copenhagen/Malmo), in 2012 at the FATEJ festival in Yaounde, Cameroon, and in 2013 in Cape Town, South Africa. In 2014, ACYTA members met at the ASSITEJ World Congress in Warsaw, Poland, where Yvette Hardie was elected for her second term as President.

Projects involving ACYTA between 2014-2017 include:

For the 2017-2020 term of the Executive Committee, two Africans are elected to serve. Yvette Hardie (South Africa) is serving her final term as President, and Pamela Udoka (Nigeria) is on the EC.