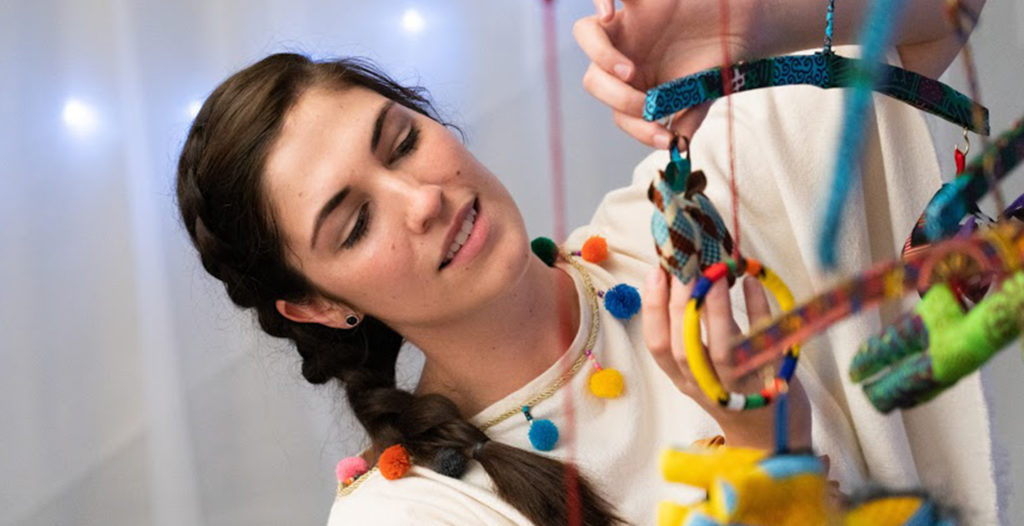 Caregivers and babies enter the theatre space. As nappy bags and strollers are put on the side and shoes are being removed, an atmosphere of questionable anticipation can be felt: What did we buy tickets for? Look at all these babies together, theatre for babies? What will happen? A baby boy, on his mother’s hip, enters the tent where the performance is about to take place… he sits center stage, nestled between his mother, upright, observing this new environment. Today, there is quite an active crowd of babies, crawling about and very interested in one another. A baby girl dressed in a floral onesie tries to catch the attention of her fellow baby audience members. Whilst mom tries to pull her back from her newfound friend, her friend sits with this, “excuse me I’m watching a performance here” face. In between all the energy, the lights fade, the atmosphere shifts, small heads shake- shake into the direction of where the magic is about to happen… Showtime… 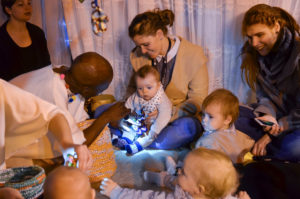 Caregivers with their toddlers during a performance.

In between the energetic, magic moments between babies and performers, my eyes can’t help but catch the baby boy sitting center stage. His eyes are transfixed, he sits firm, and unlike his peers, he is not showing any plans to move soon. But above all, it is his facial expression that strikes me: the biggest frown I’ve ever seen a baby frown, shifting from one eyebrow to the next as he watches one performer and then another. It is as if he is watching a very stressful tennis match and not agreeing with Roger Federer’s game plan. I expect the frown to fade into a new expression, but it doesn’t, this deep frown sticks. I can see the little wheel turning inside and the hypothetical smoke coming from his ears as he asks himself: what on earth is going on here? He reminds me of a scientist having an existential crisis.

A baby’s brain doubles in size within the first year of life. In response to sensory inputs the +- 100 billion brain cells of a baby’s brain (neurons) make connections with other neurons that control our lives. 0-18 months is the most crucial period for a baby’s brain development, also referred to as the first 1000 days. During this time little ones use their senses to make sense of their world and find their place within it. Early experiences shape the brain’s architecture and if the experience is good, it forms strong neural pathways, an irreversible process.

Our little frowning scientist is experiencing baby theatre with all its sensory elements. For about 30 minutes he and his fellow audience members create new brain pathways in response to this experience; what am I feeling and why am I feeling the way I’m feeling? A sudden shift occurs, the little scientist gets into gear, something shifted, maybe he is trusting this whole thing now? His frown softly subsides into a content grin, he is ready for this new world of theatre and he joins his fellow busy audience members, crawling about, reaching for props and keeping the performers on their toes. 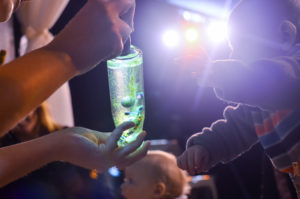 Caregivers with their toddlers during a performance.

After another one of our performances earlier this year, I had a conversation with a mom, reflecting on times in the performances when I saw her baby feeling a bit uneasy as we sang some of the performance’s songs. The mother made a very interesting remark: “I’ve noticed how he wants to cry whenever he is experiencing something that is very beautiful. He really has a very soft heart…”. What an amazing observation, I thought. By 8 months of age, this mother already understands something about her baby’s emotions and how he experiences the world. Imagine the advantage this mother has in nurturing and guiding her baby while he builds emotional intelligence.

Research claims that the end of a baby’s first year is the cornerstone of emotional development. Although emotional intelligence develops throughout one’s lifespan, a baby’s early experiences form the basis for a lifetime. I’m wondering, are we providing enough experiential experiences for our youngest ones? Do you and I believe that Theatre for Babies serves as an opportunity for a baby’s development? I can almost guarantee you; your answer would’ve been yes if you could have seen our little scientist sitting center stage.

“My writings derive from my experiences as a Theatre for Babies practitioner and how it fascinates me. I am by no means a scientist/baby expert or trying to be one; I connect my experiences with the research I learn from other very clever people.”