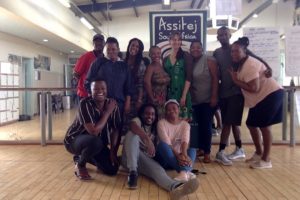 The Kickstarter project has leapt into action this year with teacher training workshops in all three provinces (the Northern Cape, The Free State and Kwa Zulu Natal) over the last two weekends!

The Kickstarter Creative Arts Empowerment project is an Artists in residency programme which trains intermediate phase Life skills teachers in a solid Arts curriculum directly connected to the CAPS. ASSITEJ SA trains facilitators in the CAPS curriculum and in experiential methodology for high-quality Creative Arts lessons and then pairs them with a teacher in rural and peri-urban schools in the following districts: KZN-Umlazi and Umgungundlovu; Free State-Fezile Dabi and Lejweleputswa; The Northern Cape-Francis Baard. 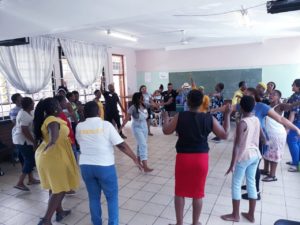 This year the project is consolidating in all the schools who have previously been a part of the programme since the 2015 pilot. Part of the recent workshops included a brainstorming session, where the teachers identified the strengths and weaknesses of the project and the areas where they needed further assistance and/or wanted to grow. We are aiming to start many after school Drama, Visual Art, Dance and music clubs in the next year, further support the Professional Learning
Communities (PLC’s) in the clusters and actively seek out possibilities for showcases, festival and competitions in these districts where the schools are based.

The workshops were hosted at the following venues: Mayibuye Cultural Centre, Galeshewe in Kimberley, Reitz Park Primary School in Welkom, Free State and Ningizimu Primary School In Umlazi, Kwa Zulu Natal. We are very grateful to those partners for their support and to the subject advisors
and district officials in all the areas who support, attend and assist with the Kickstarter Creative Arts
Empowerment project.

Teacher feedback after the workshops:

‘Thank you so much to the Kickstarter team for organising this session. It was my first time
joining the group and I had fun and gained so much. Hope everyone arrived safely. Till we
meet in March for the next workshops. Thank you to Tsholo and facilitators.’
– Mrs Lwazi Ncube (Ningizimu Special School)

‘The network has revived passion in the Arts’ – Masakale, N Marobe Primary School

‘I was empowered during the ASSITEJ SA workshop.’
– Collen, Latha, Marobe Primary School

‘Arts and Culture has changed my attitude towards learners and colleagues and even
towards authority. It helps learners to see the bigger picture and how it can change their
lives and careers.’
– S.M. Thope, RHeederPark Combined School