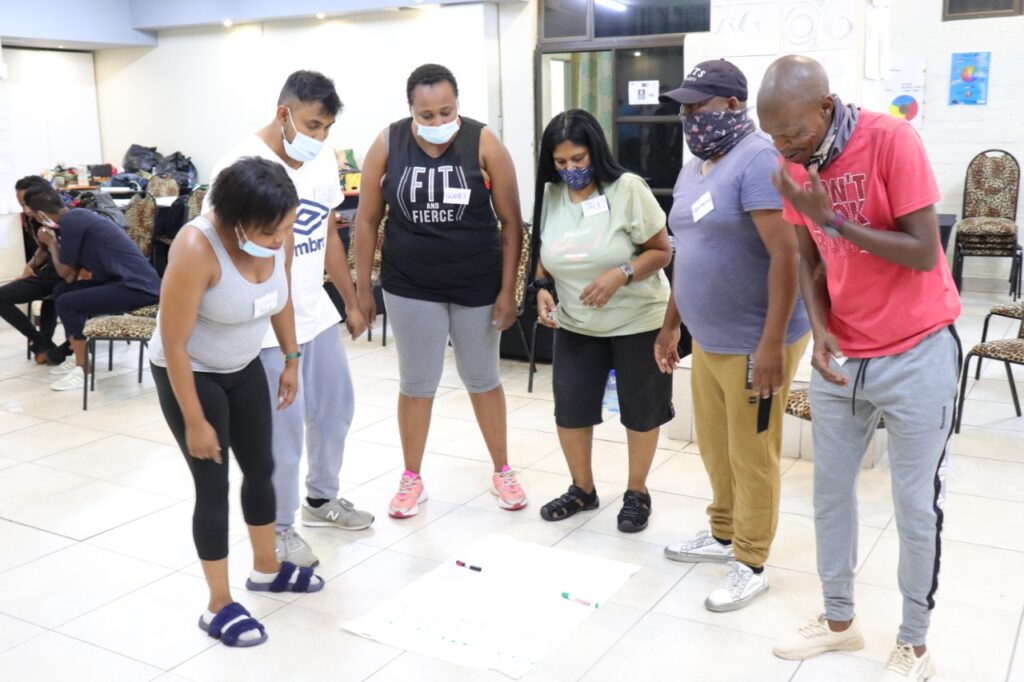 What a ride! We launched into this new year’s programme by completing 9 full days of residential training with 48 Artist-facilitators from four provinces (Gauteng, Northern Cape, KZN and Free State) in Johannesburg from Monday 10 to 18 January. The training comprised a range of skills including facilitating all four Creative Arts forms (dance, music, drama and visual arts as per the CAPS curriculum), methods for inclusivity in the classroom, arts-as-method approaches, advocacy for the arts in schools, as well as understanding and implementing the Intermediate Phase curriculum. The various workshops were facilitated by experts in each field including Millicent Khemese, Gladys Aghullus, Yvette Hardie, Thembile Tshuma, Alison Green, Tsholofelo Shounyane, Pedro Espi-Sanchis and Tamara Schultz.

Here is what the January training meant to Moeketsi Kgotle, one of our facilitators: “The Kickstarter program curated by ASSITEJ SA allows multiple perspectives of creativity. It moves through all creative art forms. It is clear, fun, simple and straight to the point. Kickstarter is the program that covers all aspects not only the creative side only but has recently begun exploring lessons in other subjects using the Arts as a methodology to teach Maths, Science, and History to name a few. The project empowers teachers, learners, and the artist-facilitator holistically. The program really gave me a breathing time earlier this year because of the Covid 19 lockdown regulations as I didn’t know what to do and I felt stuck as an artist. I believed that I needed to breathe from the experience of not being able to practice or share the skills I have in the creative industry. The January 2021 training activated creativity, sparked new ideas and was the fun that I missed. SEETA SA DUMA KO KICKSTARTER!!”

Since our January training, a group of Artist-facilitators were selected to work alongside Creative Arts teachers in schools across the four provinces. Teacher workshops have now been run in the West Rand, KZN, Free State and Northern Cape, with more workshops taking place in Gauteng over the next weeks.

Here is what Thabo Ramaine, one of our West Rand, Gauteng facilitators reports about their experience of the training and the project in the schools:
“In 2019 I attended the ASSITEJ SA Kickstarter artists facilitator training for the first time. That was my first time going through the methodologies of facilitation within the CAPS curriculum, and understanding the techniques behind it. This training was so fascinating in how the trainers were unpacking essential lessons that will help facilitators to teach in schools. I reapplied back to ASSITEJ SA in 2021 on the same Kickstarter Creative Art project because I knew it was the best programme so far for me to grow in my facilitation skills and to understand the CAPS curriculum even better. I was very excited when I was accepted to join the programme because it is a journey I needed to go through in order for me to be even more versatile in my facilitation approach. So far it has been a very wonderful journey. Since I have started working in schools it has been exciting to see how the learners engage into these lessons and how they show the freedom to express themselves without showing the fear of failure. The West Rand teacher’s training was so awesome as well, having to see life skills educators enjoying the lessons and being excited to become better in delivering the creative arts to their learners.”

About the programme:
ASSITEJ SA is the national partner to the Department of Basic Education in Creative Arts. The ASSITEJ SA Kickstarter Educational Empowerment project (KS) is a teacher empowerment and artist in residency programme, focused at the Intermediate level (Grade 4, 5 and 6) in South African Primary Schools.

It was originally implemented as a case study to assess programme outcomes for both target and beneficiary groups; that is, creative arts teachers and their pupils, across 20 different schools, while comparing their results to those who had not received the creative arts intervention at all. The ASSITEJ SA Kickstarter Creative Arts project pilot was so successful that it won the Development Business Arts South Africa award with Rand Merchant Bank in 2017.

The project first began in 2015 in two districts in Kwa-Zulu Natal (Umlazi and Umgungundlovu) and two in the Free State (Fezile Dabi and Lejweleputswa). In 2018, the project expanded to include 10 schools in the Northern Cape in Kimberley. In 2022, ASSITEJ SA is rolling out the project to 10 schools in the Gauteng district (Soweto and the West Rand), as well as 10 schools in each of the other three provinces (a total of 40 schools).