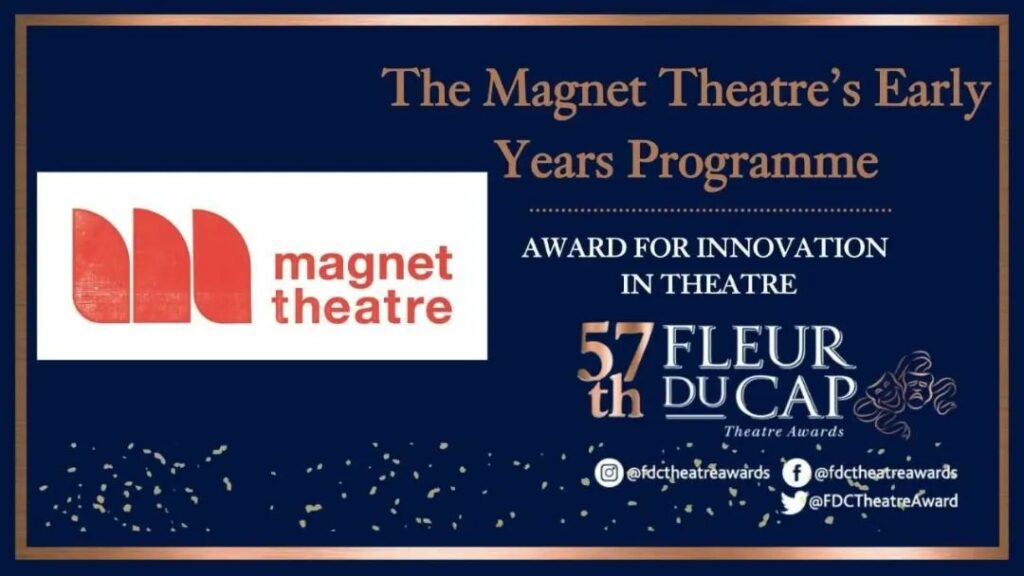 The Magnet Theatre’s Early Years Programme won the Award for Innovation in Theatre at 57th Fleur du Cap Theatre Awards which took place on 27 March 2022. This was a milestone for theatre for young audiences since this field is very seldom the focus of these kinds of awards.

The Fleur du Cap Theatre Awards are amongst the most coveted within the South African performing arts fraternity; the awards have been honouring theatre excellence since 1965. The Fleur du Cap Theatre Awards recognise and celebrate theatre practitioners for acting, directing, staging and technical abilities.  Outstanding contribution to South African theatrical development and excellence is also celebrated. Every year, Fleur du Cap winners are chosen after an evaluation of around 90 productions staged at some 20 venues in and around Cape Town. The judging panel comprises local critics, journalists, writers and drama educators. The 57th awards covered a two year period due to the COVID pandemic, which has so deeply impacted on the theatre scene.

The Magnet Theatre won this year’s Award for Innovation in Theatre for its Early Years Theatre Incubator Project. Since 2014, Magnet Theatre has been developing African theatre for audiences under the age of seven. The Early Years Project not only creates and incubates new uniquely South African and African work for staging locally and abroad, but also provides training in acting and stagecraft through their Trainee programme. They further enlarged the scope of their training to involve other artists from the African continent, which has contributed to the growth of early years work in Africa more generally. They have also ensured that the impact of their work is carefully researched, with one focus being the importance of early years work in establishing stronger bonds between children and their care-givers.

ASSITEJ SA has had the pleasure of being part of the Early Years project from its inception, assisting with identifying and inviting international experts to work with Magnet Theatre, identifying local partners for the work, and ensuring that a number of the theatre’s productions have been performed at various ASSITEJ events, and toured extensively, both nationally and internationally.

Africa Melane, chairperson of the panel of judges, stressed that developing and nurturing audiences for the future was essential to the sustainability of the theatre industry. “The creation of new work for children ranging from zero to seven years of age can only be lauded. Often it is this work that provides audiences with their very first encounter with live performance. Can you imagine a greater honour as a performer?”

The Early Years Programme, is endorsed and supported by ASSITEJ SA, as it aligns with our values of giving every child access to the arts, and especially to live theatre, from the earliest possible age. We would like to congratulate the Magnet Theatre on this well-deserved recognition.