My residency in Michigan, USA, with Spinning Dot theatre was amazing!

Several things happened there that marked my residency and are worth highlighting: 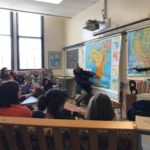 My play, ‘The Kids from Amandla Street!’ had its US premiere. It performed thrice in Michigan and did two more shows in Chicago to a great reception. The play, having strong themes around guns and youth, was coincidentally taking place a few weeks after a student in Florida opened fire at his school, killing 17 people. So performances were often followed by a reflection that allowed me to learn of and see the effects of gun violence in that country, and to appreciate the dialogues that my play helped to continue and inspire. 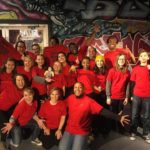 Part of the residency was presenting talks at two universities, as well as at a middle school. I spoke candidly about the history of South Africa and the role it has played in how we tell stories. I spoke about my grandfather’s influence on my worldview and what I think young playwrights ought to strive to do with their writing.

I met many beautiful souls, young and old, and was so affected by the experience that it has renewed my passion to write and keep writing more new work for young audiences!