A pot of stories and multilingualism brew in the theatre. Magic. Learnings. Unlearnings. Relearnings. Plays! Monate!

Molo, ola, Ni hao, 你 好, Bonjour, dumelang, Hallo, Hello. These are some of the languages that were spoken to set the scene for what was to come; A live theatre performance for young audiences. On this day, an audience that included learners and teachers from Good Shepherd as well as Samuel Ntsiko Primary School had gathered for what has now become a tradition at Rhodes University in Makhanda, to “take a child to the theatre”. The chit chat, whispers and laughter created a buzz that faded as soon as the lights gave a cue.

For more than 20 months, it had been impossible to watch theatre for young audiences with young audiences, or anyone else for that matter. This was due to covid – 19 restrictions. In a small way, this experience revealed how the trajectory of the pandemic had a ripple impact on our lives. Apart from the economic strain, research suggests that mental health distress is on the increase, with young people taking their own lives or engaging with lifestyles that sometimes place them in vulnerable to situations such as consumerism, cyberbullying, kidnappings and human trafficking…

… BUT, here we were sitting next to one another, eyes set to the stage. Enthralled by four ten minute productions: Don’t play with play wena, Ginger in Tanzania, Beauty is not Alien and Just one day; devised by various duos. 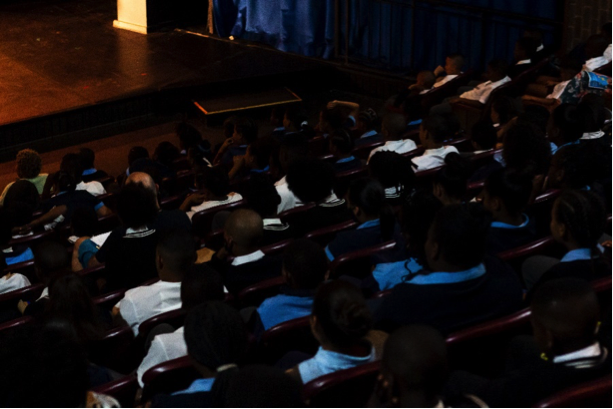 2022 Honours student, Kgothatso Rapoo reminded me that on exactly the same date in 2019, the second year students, who had chosen Theatre Making for Young Audiences (TYA) as their elective, had performed for young audiences. He had a visual memory to share. 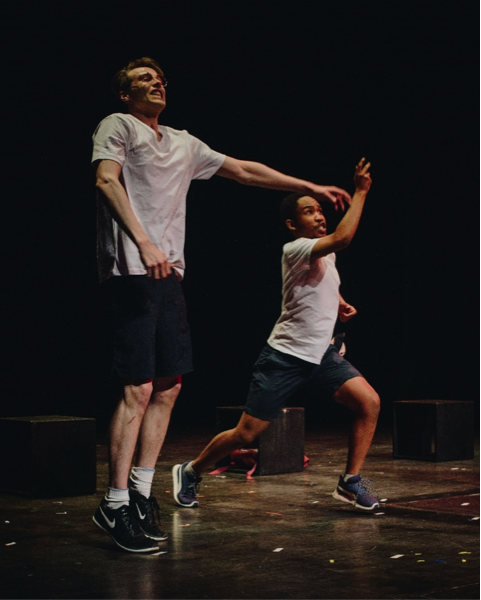 The play Don’t play with play wena was devised and performed by Thumi Sibhozo and Siphosethu Mankai. This play followed two siblings who forgot to play with each other, their toys and everyone else as they got locked in the virtual world. Loadshedding kept interrupting their routine to an extend that they had to remember that they could physically play with each other. Although their fascination with the virtual world introduced us to fascinating stories such as those of the world’s youngest Mathematics Professor, Soborno Isaac Bari (10) as well as Pepper; the world’s first humanoid robot (some of you might remember when Pepper accompanied Basic Education Minister Angie Motshega in announcing the 2019 Matric results), it turned out that it was better to find a balance between technology and play was critical. ASSITEJ SA Education Manager Alison Green has already raised this point, especially as it pertains to education. You can read all about this in her 2019 article; “A hole in my stockings: Disrupting power through play in the Kickstarter Creative Arts Project”

The other play; Ginger in Tanzania was devised and performed by Khanyisa Bilose and Sivu Wani. In it, somewhere in Tanzania, Ginger, a young Giraffe helped others to get through a drought. But along the way the animals met strives that ultimately showed the importance of kindness. With the looming effects of climate change and scarcity of water, the play exposed the dark reality of choices such as manipulation and hurts that are likely to be inflicted during challenging periods. ASSITEJ SA member and climate change activist, Kyla Davis has already started conversations with her work through Well Worn Theatre Company. According to her website, her company was established to create productions for young audiences around ecological themes.

Beauty is not Alien devised and performed by Lwando Ntshakaza and Lesego Phale followed the life of Samantha (played by Lesego) when she celebrated her 9th birthday. On the day, she dressed very well because “all eyes have to be on me”, but some aliens came and “took” the spotlight away from her”. In the process, Trevor (played by Lwando) made her to realise that she is beautiful in her own way. With the appearance pressure engulfing young people, the play revealed how both may be corroded in pursuit of “perfect/the best” looks. Theatre Maker Zanele Tlali recently used arts education to explore the issue of grove culture amongst young people. Consequently, startling results showed the lengths that young people go to in order to impress. Those included being in transactional relationships with older men, women or non binary people. It emerged that children as young as 13 years old, would be happy to dress well and drink expensive alcohol in exchange for sex and other necessities. Unfortunately, anecdotal evidence suggest that these kind of choices have led to kidnappings, death, and human trafficking of young people.

The last play for the day; Just one day was devised and performed by Athi Nondzaba and Siphokazi Bam. In this story, Sarah (played by Siphokazi) lost everything she loved due to war. She ended up being homeless and being mistreated by others, including her teacher. This story brought to the fore, the ugly reality of ill-treatment that learners experience from teachers. Recent studies confirmed that learners experience physical violence (including corporal and sexual), as well as verbal abuse in schools. As a tool for communication, the stories not only portrayed the reality, but also provoked a new discussion around the plight of children and young people.

“What a way to start a term” said English teacher, Phumeza Stamper from Samuel Ntsiko adding that the performances had been educational. Learners from the schools also added something about their experience on the board outside the theatre.

I am very pleased that this time around, I am able to add a voice regarding live performances being brought to communities around South Africa and beyond. I commend you all for your creativity and commitment in bringing theatre to children and young audiences.

Should any of the themes from the plays shared have any resonance, please do not hesitate to visit our website. Engage with the resources and learn more about how to prevent and provide care and support for young audiences and beyond.

– Lalu Mokuku is the chairperson of ASSITEJ SA and Executive Committee Member of ASSITEJ International. She sits in the Policies and Procedures committee. She actively participates in the Africa Children and Youth theatre Arena (ACYTA) and is currently attending the ASSITEJ regional workshop that coincided with the 29th Jordan Theatre Festival in Amman, Jordan online.