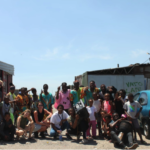 The Vrygrond Family Festival took place 28 November – 1 December 2018. Over the weekend of 30 November – 1 December the community of Vrygrond was activated through multiple activations and performances. The aim of the festival is to collaborate with members of the community, to provide a family-friendly atmosphere, and provide access to quality theatre made specifically for children and young people.

On the Thursday, 29 November Sikelela Kwatsha led a dance-based activation at the Vrygrond taxi rank. He choreographed a short routine which the team danced to and invited members of the community to join in.

On Friday the festival started with a fashion show through Vrygrond organised by Ubuntu Trends. Ubuntu Trends is a fashion collective founded by Sikelela Kwatsha and Litha Samsam. Ubuntu Trends designed their own clothes and brought models together for an unforgettable catwalk.

In the late afternoon crowds of children and parents were treated to a jam session filled with the playing of drums and marimbas outside the Capricorn Primary School hall. Thecrowd were then led into the hall where theatre and dance based groups for children performed. We are thankful to the VIPs (Vrygrond Ingcungela Players), Isixhokelo Primary School from Khayelitsha, Overcome Little Princesses and the Jungle Theatre Children’s Theatre Club.

Saturday morning began with a local market with stalls filled with cupcakes, muffins, smoothies, and sausage rolls. We also activated the space with music and a small wooden pallet stage. The market was a great success and the stalls were soon sold out.

After the market we held a kids cinema in the Garden Room where we screened the blockbuster film Black Panther. We advertised the event through a short walk around the community with music, speakers and banners.

The festival ended with an open mic in the Worth Hall at Capricorn Primary School. It was open to the public and we had a good number of young people sign up. There have been different kinds of performances including spoken word, song, rap and dance. It was a lovely way to end of the festival and we look forward to doing it again next year.